Syndication Networks Corporation is the Chicago-based radio syndication consulting and marketing company. The company’s consulting and marketing clients include experts and individuals getting into radio syndication for the first time, as well as veteran syndicators and major radio networks seeking higher ratings and revenue for their programs. SNC’s in-house consulting and affiliate relations staff has a combined 150 years of experience in broadcasting and syndication. Recently, the company moved to new offices to accommodate its growing affiliate relations department and studio production facilities. The company’s programs are broadcast on nearly 2,000 radio stations nationally.

Chris is the only syndication consultant in America who is a current, successful host of multiple syndicated radio shows, and who also has experience as a major market general manager and program director. His career in radio includes top stations in New York, Philadelphia, Chicago, Pittsburgh, and other markets.

His daily syndicated program, The Success Journal, is heard in over 150 markets. The award winning show spawned a catalog, a popular book (21-Day Countdown to Success published by Career Press), articles in national publications, a weekly segment on national cable TV, speaking engagements, and over 100 interviews on radio and television. Chris also hosts InfoTrak, a weekly interview show heard on over 700 stations and a daily health feature, Check Up On Health.

Syndication Networks’ talented staff has a combined 150 years experience in radio and syndication. Our clients include those just starting out in syndication, as well as established show hosts, producers and networks seeking higher ratings and revenue.

Syndication Networks is based in the Chicago area. The company has been in business since 1993, with an established online presence since 1996. Consistently top Google-Ranked for radio syndication, SNC offers its nearly 2,000 affilate stations a wide array of quality syndicated content. SNC is also the leading online resource for hosts and producers seeking syndication consulting and information.

PROVEN, EXCEPTIONAL RESULTS ARE YOURS WHEN YOU CHOOSE SYNDICATION NETWORKS. 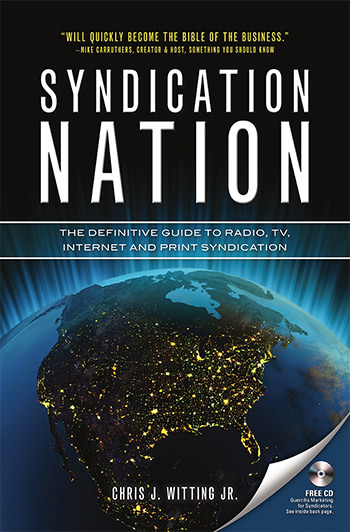 SYNDICATION NATION is the first-ever comprehensive how-to guide for successful syndication in all major media.